Half-century long operation of computer system and research for numerical simulation technology have been contributing to the progress of aerospace fields. 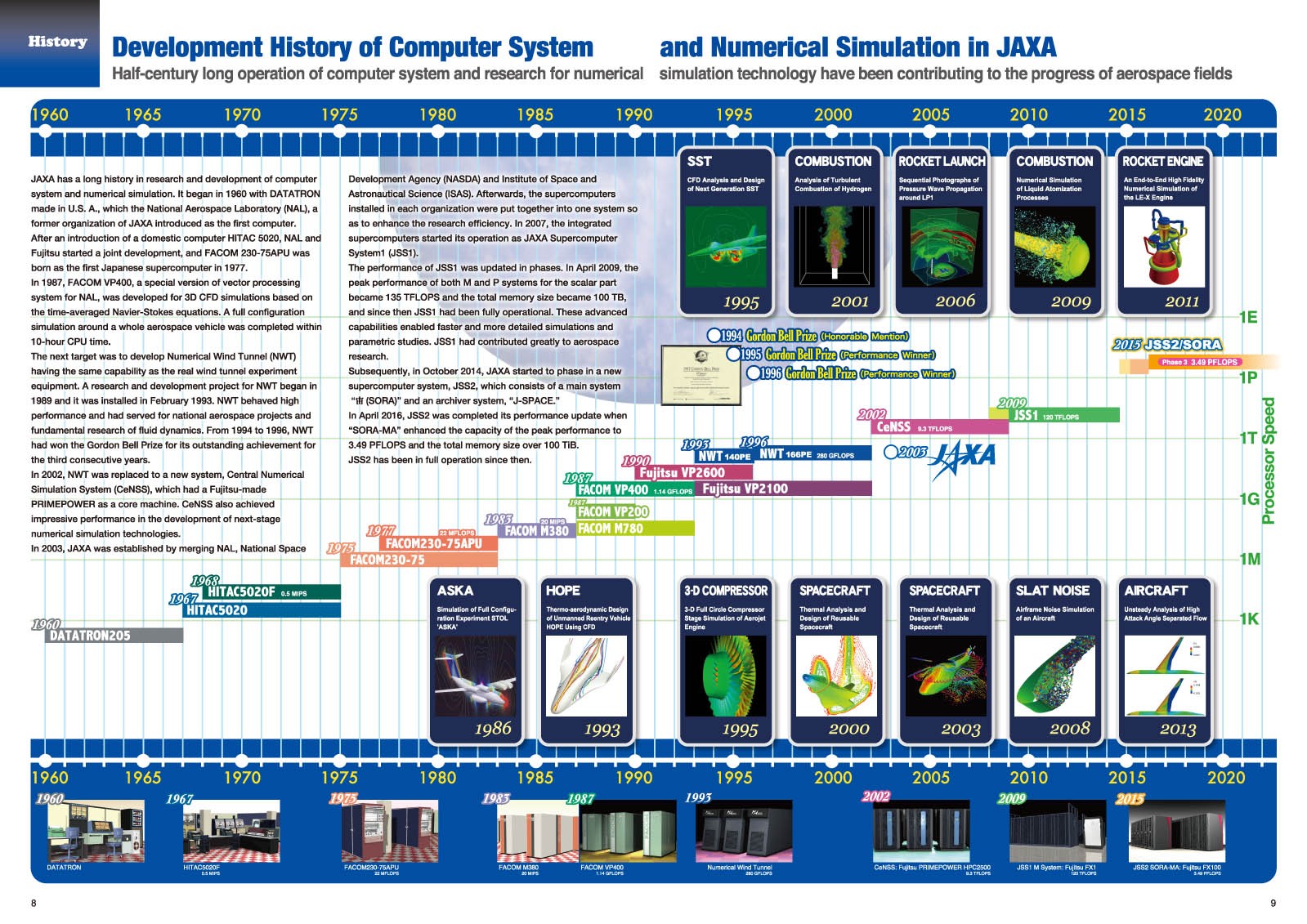 Development History of Computer System and Numerical Simulation in JAXA

JAXA has a long history in research and development of computer system and numerical simulation. It began in 1960 with DATATRON made in U.S. A., which the National Aerospace Laboratory (NAL), a former organization of JAXA introduced as the first computer.

After an introduction of a domestic computer HITAC 5020, NAL and Fujitsu started a joint development, and FACOM 230-75APU was born as the first Japanese supercomputer in 1977.

In 1987, FACOM VP400, a special version of vector processing system for NAL, was developed for 3D CFD simulations based on the time-averaged Navier-Stokes equations. A full configuration simulation around a whole aerospace vehicle was completed within 10-hour CPU time.

The next target was to develop Numerical Wind Tunnel (NWT) having the same capability as the real wind tunnel experiment equipment. A research and development project for NWT began in 1989 and it was installed in February 1993. NWT behaved high performance and had served for national aerospace projects and fundamental research of fluid dynamics. From 1994 to 1996, NWT had won the Gordon Bell Prize for its outstanding achievement for the third consecutive years.

In 2002, NWT was replaced to a new system, Central Numerical Simulation System (CeNSS), which had a Fujitsu-made PRIMEPOWER as a core machine. CeNSS also achieved impressive performance in the development of next-stage numerical simulation technologies.

In 2003, JAXA was established by merging NAL, National Space Development Agency (NASDA) and Institute of Space and Astronautical Science (ISAS). Afterwards, the supercomputers installed in each organization were put together into one system so as to enhance the research efficiency. In 2007, the integrated supercomputers started its operation as JAXA Supercomputer System1 (JSS1).

The performance of JSS1 was updated in phases. In April 2009, the peak performance of both M and P systems for the scalar part became 135 TFLOPS and the total memory size became 100 TB, and since then JSS1 had been fully operational. These advanced capabilities enabled faster and more detailed simulations and parametric studies. JSS1 had contributed greatly to aerospace research.

Subsequently, in October 2014, JAXA started to phase in a new supercomputer system, JSS2, which consists of a main system “宙(SORA)” and an archiver system, “J-SPACE.”

In April 2016, JSS2 was completed its performance update when “SORA-MA” enhanced the capacity of the peak performance to 3.49 PFLOPS and the total memory size over 100 TiB. JSS2 has been in full operation since then.