EORC was established under the Japan Aerospace Exploration Agency (JAXA) in April 1995 as Japan's core research organization for the scientific studies, analysis, satellite data processing, calibration/validation, and archiving of the Earth observation satellites data. By continuing to carry out these activities using space-based Earth observation technology, we hope to assist humankind in its adaptation to climate change. 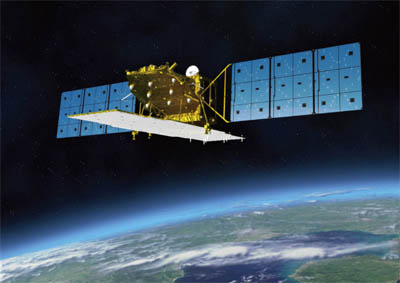 This study aims to improve numerical weather prediction (NWP) model forecasts by an effective use of earth-observing satellite data through an advanced data assimilation method. In addition, we also aim to produce a new precipitation product through our global atmospheric data assimilation system.

This study also explores an effective use of satellite data including GPM DPR through an advanced ensemble data assimilation method for improving NWP and pioneering a new precipitation product based on an NWP model and satellite observations.

Ensemble simulation of global cloud-system resolving model with higher (3.5 to 14 km) mesh resolution on JSS2 is conducted to further understand possibility of an extreme phenomena.

Surface skin temperature (color: Celsius) and outgoing longwave radiation at the top of the atmosphere (white: W/m2) representative of clouds in the model

Integrated Environmental Modeling of Air Pollutions in a Global Scale

To estimate climate change properly, it is essential to understand the complex role of aerosol (such as PM2.5 and desert dusts) in the Earth.
JAXA introduced the global atmospheric chemistry model coupled to the high-resolution non-hydrostatic icosahedral atmospheric model (NICAM-Chem) into JSS2 and is utilizing satellite observation data for data assimilation and model validation.
We aim to answer the scientific questions of aerosol behavior and interaction with clouds. 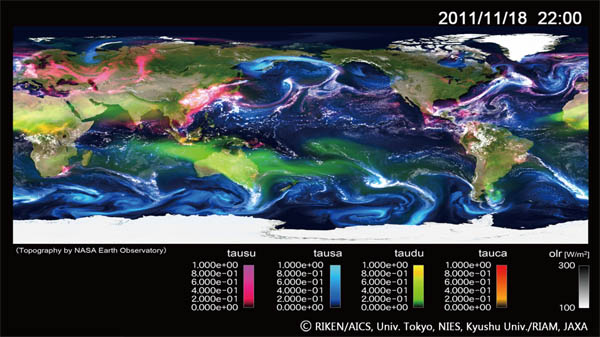 Daily sea surface temperature (color) and ocean currents (vector) over
the ocean of south of Japan calculated by regional ocean model with 3-km
spatial resolution at JSS2 from *1 June to 30 September*, 2017.
Sea surface temperature data observed from Himawari-8 and GCOM-W
satellites is assimilated to the model through the data assimilation
system. Output from the model reveals dynamic variation of Kuroshio
current and its meander. Since the end of September 2017, the Kuroshio
large meander has started.
(Collaboration between JAXA and JAMSTEC)