High level of awareness of the technical challenges with supercomputers

In order to solve the technical issues in the operation of supercomputers, JAXA has cooperated with the manufactures to apply technical improvements, and provided the information necessary to users to run the programs efficiently. 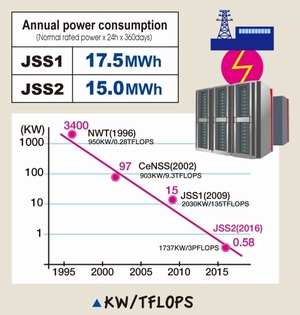 Historical view of of Supercomputers in JAXA, power consumption per TFLOPS(KW/FLOPS)

Power consumption per FLOPS has been drastically decreased with the progress of semiconductor technology, but it is not enough to satisfy the ever-increasing demand for processing power by the growing scale of the calculation.

We have been making every effort to reduce the power consumption of the whole supercomputer system.

Performance ratio per rack of JSS1 and JSS2

Performance improvement of JSS2 was contributed by of its processors, sophisticated parts and design. JSS2 has adopted the processors aiming to achieve both low power consumption and high throughput. The performance ratio per processor is 25 times better than that of JSS1.

Main processors of JSS1 and JSS2 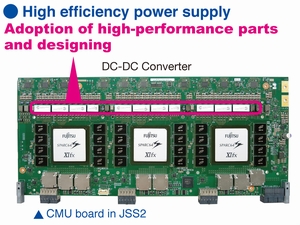 CMU board of JSS2 SORA-MA

Circuit board of SORA-MA is carefully designed to improve power efficiency with high-performance and efficient parts. 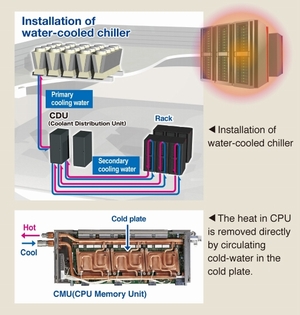 The circuit board in the supercomputer generates more heat as the density increases, but the conventional cooling system cannot handle the huge heat. We have adopted water-cooling system with cold plates which removes more heat efficiently in JSS2.

Layout of the computer room is changed according to systems installed. The room was halved due to the reduction of the installation footprint of JSS2. With smaller space requirement, we achieved a reduction of the area needed for air conditioning to half.
The “hot-aisle/cold-aisle” layout, adopted in JSS1, is inherited in JSS2.
Moreover, we conduct a regular review of the temperature setting in the computer room. It is set at 20 degree Celsius, higher than when JSS1 was running. 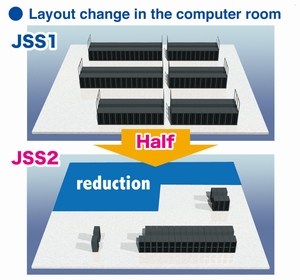 Footprint of the climate-controlled area of JSS1 and JSS2

Amount of energy needed for climate control for JSS2 (as of phase 2) was reduced to 1/6 of that for JSS1 with the adoption of the water-cooling system and the improved environment of the computer room. 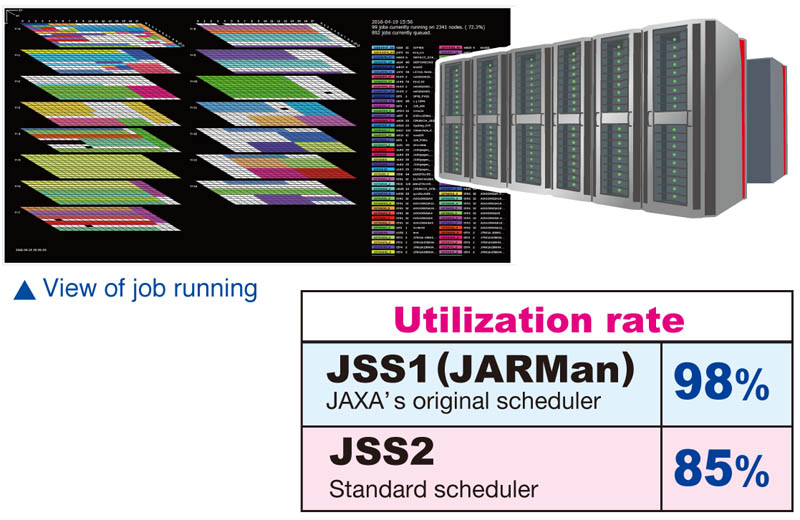 Utilization rate of JSS1 and JSS2

When multiple users use a parallel supercomputer at the same time, many independent jobs of various amount of resources needed are submitted simultaneously. Job scheduler handles the jobs in efficient and fair fashion.

We had developed and used JAXA's original scheduler “JARMan" until JSS1. It maintained utilization rate of as high as 98%.

Unfortunately “JARMan" could not run on JSS2 due to the different inter-connects from JSS1. This dropped the rate to 80% when JSS2 started operation.

Since then, the operation and settings improvements have raised the rate to 85%.

We are researching new technologies for better scheduling of jobs.