In this study, by conducting both numerical simulations and wind-tunnel tests, the aerodynamic characteristics and associated flow features of the Epsilon launch vehicle are extensively investigated at Mach 1.5. The results provided are axial/normal/side forces, pitching/yawing/rolling moments, detailed three-dimensional flow structure, along with effects of the Reynolds number (between wind-tunnel and flight conditions), skin stringers (small devices on the main body), and the difference from another configuration called “NextGenEpsilon”.

This set of data includes unavailable ones at either the experiment stand-alone or the actual flight. Magnitudes of computed aerodynamic coefficients are in good agreement with the experiment and within the design criteria. According to the results axial force is not affected by those above-mentioned factors, but local normal force is influenced around skin stringers by the Reynolds number, and the rolling moment can change even its sign. Detailed explanationswith regard to relations between aerodynamic characteristics and those flowstructures are also provided. 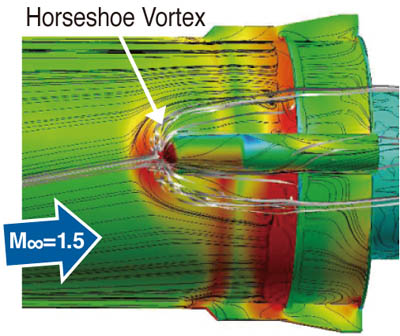 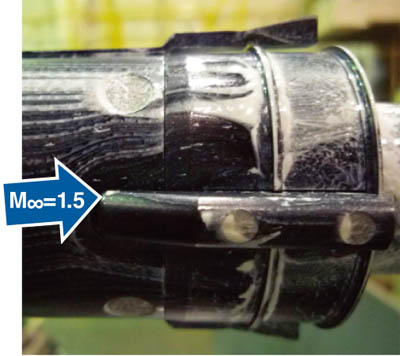 The launch vehicle plumes radiate strong acoustic waves and may damage a satellite installed in the nose fairing. Prediction of the acoustic level at lift-off is essential for the design of payloads and launch pad. Numerical simulation based on the Large-Eddy Simulation is carried out to find the noise generation, and then, to minimize the impact.

At the launch pad of Epsilon launch vehicle, a built-in duct is installed in order to defend rockets from local sonic of wall jet. The skirt of the exit of the duct was extended to reduce the shock wave. 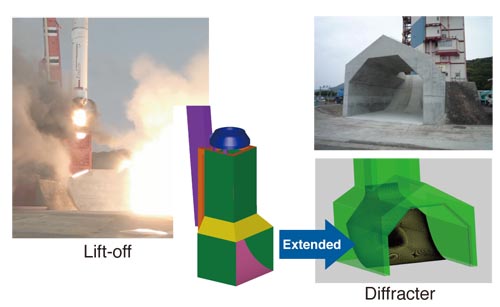 The extended duct of the epsilon launch vehicle

The movie shows a simulation of static pressure distribution emitted from the exit of the duct. The acoustic wave diffracts at the top of exit of the skirt and propagates to the launch vehicle body. This simulation shows the effectiveness of the extended skirt in lowering the strong acoustic wave at the moment of the lift off.

Static pressure around the duct of the epsilon launch vehicle 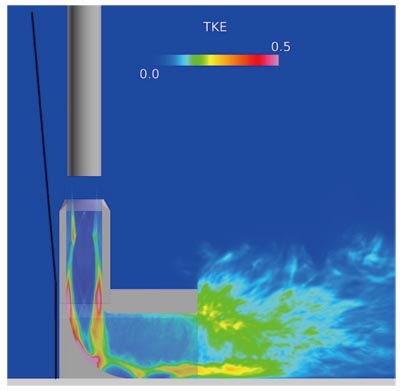