JAXA Aeronautical Technology Directorate is promoting a supersonic transport(SST) research program named “R&D for System integration of Silent SuperSonic(S4) airplane technologies” for low noise SST design technologies. One of the targets of this program is to develop the technologies for reducing sonic-booms to meet an expected future noise standard. Some low sonic-boom design concepts are studied and applied to a 50-passenger aircraft configuration which is defined as a technology reference aircraft and its sonic-boom intensities are compared to those of a conventional Concorde-like SST configuration. In order to demonstrate these low sonic-boom concepts and design technologies, a low-boom demonstration flight using a scaled non-powered experimental airplane named D-SEND#2 was conducted in July, 2015. In the design of the D-SEND#2 airplane, an effective and accurate sonic-boom prediction tool was required and a CFD tool for near-field pressure signature prediction by combining a structured and unstructured CFD codes was developed. 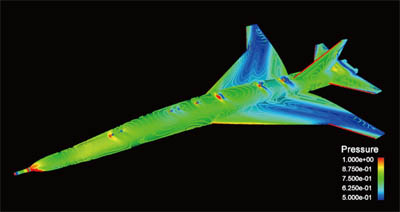 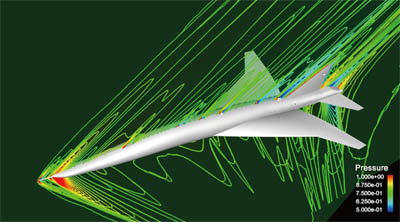 Movie of the numerical simulation of D-SEND#2

Numerical Simulation of the Effect of Atmospheric Turbulence on Sonic Boom

The shape of waveform changes during the propagation from high altitude to the ground. 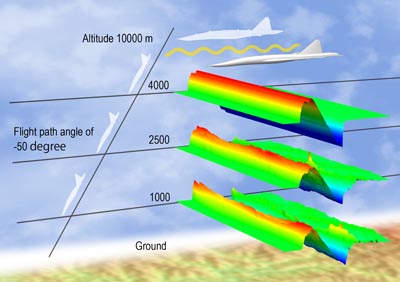 Movie of the deformation of waveform